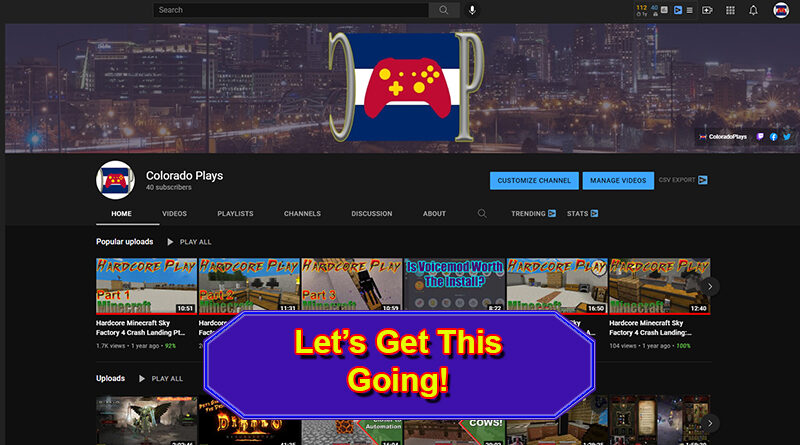 We’ve since long moved out of the Twitch sphere for the time being, but have yet to really put a lot of effort into the YouTube channel. In hopes that blog posts will inspire me to get this going, I’ve decided to make it a series. Can we build a channel from scratch and be successful?

I suppose that really depends on what you view as successful. Everyone has a different idea about what “success” means to them.

So for the sake of argument, let’s assume viewership is the measurement we’ll use.

Table of Contents hide
What Goes Into Setting Up a YouTube Channel?
1. Come Up with a Viable Uploading Schedule
2. Doing the SEO Research for Videos
3. What is Everyone Watching?
4. Don’t Be Afraid to Try New Things
5. Grow a Thick Skin
Getting Started with the YouTube Channel
Time Is Not On My Side…

In reality, there are a lot of cogs turning when creating a channel. Especially one centered around gaming. After all, there is a ton of competition on YouTube for the same eyes you’re trying to get.

This means we need to consider what we can offer that is different from everyone else. And at the moment, that’s not really a lot. Most of us have full-time jobs.

What can we do to start getting the ball rolling and turn the channel into something worthwhile?

1. Come Up with a Viable Uploading Schedule

At the moment, we really don’t have the most reliable schedule when it comes to uploading to YouTube. It usually falls a bit behind as we obviously put our paying jobs above all else.

But if we want to build a successful YouTube channel, content has to come at some point. After all, how are we going to increase watch time without anything to actually watch?

At the moment, it’s easier to stick to live streaming on Thursday and Sunday. But, those videos usually don’t reach a large audience. That’s because YouTube gives preferential treatment to video-on-demand over live streams.

Especially if you have an incredibly small channel or just started.

So, the first step is to actually set aside time to get into a routine of uploading videos.

2. Doing the SEO Research for Videos

YouTube is a search engine. As such, it needs to be treated that way. Things like titles and descriptions make a massive impact on visibility. But I’ve also found that using certain terms within the video play nearly as much of a role.

Why wouldn’t the algorithm use what you say as a metric? Think about it; if YouTube can create a “transcript” of your video for closed captioning, it can surely use that text for context in search.

At any rate, analyzing what top creators are doing for titles and descriptions can help guide you on the path to create your own.

3. What is Everyone Watching?

Not all games are going to perform the same on YouTube. Unfortunately, a lot of the games we like to play are virtually non-existent when it comes to viewer interest.

Not to mention how most of us have no interest in playing some of the “hottest” games out there. For example, Fortnite will never be installed on my computer.

Instead, we’ll have to play around a bit and see what titles work best. But, that would lead me to my first point of actually uploading videos on a regular basis.

One thing I’ve learned over the years of having blogs and YouTube channels is sometimes it helps to go outside of your comfort zone. In some cases, this means trying things you probably wouldn’t have in the past.

Fortnite is still not going on my computer.

We’ve talked a few times about doing videos for things we’ve done in Colorado. I mean, come on. We are Colorado Plays after all.

In any case, trying new things here and there is a good way to see what works best for your specific audience. Sometimes that means doing hardcore Minecraft, other times that might mean going to a real-life ghost town in Colorado.

No matter what platform you use, no community is more toxic than gamers. In fact, it’s why I stopped playing a lot of PvP games. It’s not that they hurt my feelings. It’s just that I’m too old to care and have better things to do with my time.

If I wanted to listen to 12-year-olds whine, I’d have become a teacher.

So, as a creator, you’ll have to grow a bit of a thick skin. Gamers hate at the drop of a hat. Well, a large portion of them, anyway. Some people hate for the sake of hating.

OK, I’ve already set up a lot of stuff on the YouTube channel, such as the avatar and background image. Now comes the fun part of figuring out how and when we’re going to start uploading.

As I said, we all have full-time jobs and time is quite narrow. Especially for me.

But if we want to gain an audience, it all comes down to content. So, I’ll spend a bit of time today trying to figure out when the best time to record and upload will be.

Since I’ll be doing most of this myself, it all comes down to when I have the time.

No matter what, though, I need to start uploading more often than once per month. You can’t really grow a gaming YouTube channel unless you consistently publish videos.

It’s like blogging, really. The more active your website is, the more likely Google will rank it higher. And yes, I’ve done that experiment a few times.

YouTube is similar. Active channels get preferential treatment compared to channels that are just kind of there.

Time Is Not On My Side…

The hardest part about setting up a gaming YouTube channel is finding time to do everything. I do a lot on any given day, and finding time to record and upload is often difficult.

But like I said, watch time isn’t going to increase if there’s nothing to watch. So, let’s see how well I can get Part 1 of this series going.

A plan means nothing without putting in the effort to see it through.

Let me know your thoughts on this... Cancel reply

This site uses Akismet to reduce spam. Learn how your comment data is processed.