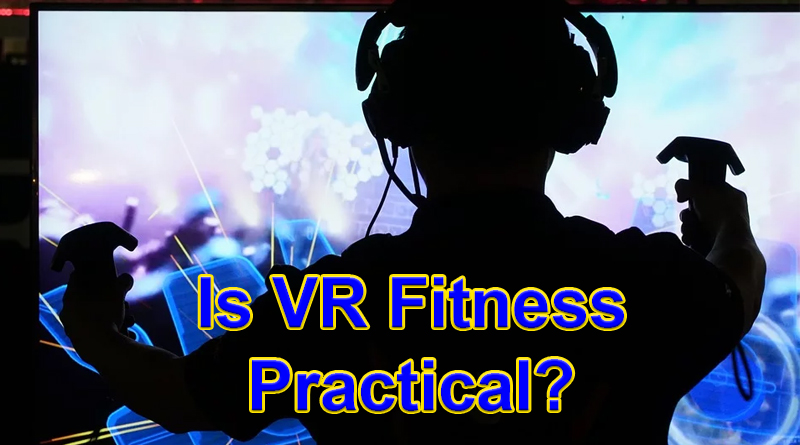 I am a big fan of gamifying fitness in any capacity. This is because gamification helps to keep your mind engaged by making a workout seem less grueling. And I’m excited to give VR fitness a try. I’m just not 100% sold on the idea.

While the prospect looks simply amazing for people to get fit, it might not be the most practical in the long run. I don’t have experience with it yet, so I’ll reserve my judgments.

Table of Contents hide
How Practical Is VR Fitness?
Keeping the Body in Motion
Fully Immersive
Considering the Fun Factor
The Potential is Great, But…
The Lifespan of VR Equipment
Increasing the Risk of Injury
Supporting Game Titles
The Cost of VR Fitness
No Weighted Gloves…Yet
Taking Longer to Prepare
Looking Forward to Comparing with Kinect

How Practical Is VR Fitness?

I’m still a supporter of the Xbox Kinect…and yes, I know it’s virtually dead. But you can’t argue with results. I’ve lost more than 80 pounds and continue to use it to this day.

However, I am also a realist. I know that once my Kinect finally kaputs on me, I’ll need a viable alternative.

So, something like VR fitness intrigues me quite a bit. Especially if it has the same effect as what I have from the Kinect.

And you can bet that I’ll track every game with my Fitbit as I do today.

Keeping the Body in Motion

Any activity that keeps your body in motion is beneficial. It’s all about burning more than you consume. And because VR fitness keeps you standing and moving, you can easily burn off some fat and tone some muscle mass.

Depending on the game, you can work out everything from your chest and back to your thighs.

One of the things I love most about the Kinect is being in the game itself. Your body is the controller.

However, VR workout games really immerse you in the experience. Instead of maintaining a two-dimensional character, some games make it seem like you’re really on location.

But, that’s what VR is supposed to do in the first place. This means it could easily increase the interest factor of maintaining a regular workout routine.

The whole premise behind gamification is to make a mundane chore seem more like a game. The more entertained you are, the more likely you’ll keep doing the activity.

From what I’ve seen, there are a lot of seemingly fun titles out there to build your own Virtual Reality gym. And it’s something I am incredibly interested in doing.

The Potential is Great, But…

Setting yourself up for VR fitness isn’t without a few drawbacks. As I said, I don’t have experience with the system yet. So, this is all from practical observation.

Once I set up my own VR fitness routine, I’ll definitely write a more detailed blog post.

The Lifespan of VR Equipment

One problem I have with using weighted gloves, wrist bands and leg weights is the lifespan. When I play, I play pretty hard. And most of my wearables are stained with sweat.

When I’m playing VR fitness games, is the gear going to slide off? Will continuous exposure to sweat, especially on the headpiece, ruin the equipment?

And I can’t imagine your friends and family are going to want to join in if you do sweat all over the VR gear. So, it might be a solo routine – as opposed to the Kinect where I can have four other players in most of my games.

Increasing the Risk of Injury

Virtual Reality is an incredible prospect. But, I’ve seen many a person smash into a wall because, well, you can’t see “reality.” For those who live in small homes, this is going to pose a problem.

Even in my living room, which is about medium-sized, I know I am going to trip over the couch or chair. And let’s not forget the occasional backhand someone is going to take while walking past you.

Because let’s face it; a lot of people are not that observant when walking through the house. My teenage daughter sometimes walks into a door, still!

I remember when the Kinect was first advertised and many people were on board with the device. Then, developers started taking a half-assed approach to the system and not really delivering titles that were engaging or effective.

Will the same thing happen to VR fitness? I’d hate to dump more than $1k into something that just doesn’t have a broad gaming library.

Then again, I do have a lot of games that I would love to see in VR alone…such as Subnautica and Doom. Fallout 4 might be kind of fun as well, so the VR device itself wouldn’t be a waste.

But we’re talking about VR exercise games, here. Will developers deliver fun and worthwhile titles a year from now?

The Cost of VR Fitness

There’s no doubt that doing Virtual Reality the right way is expensive. However, the costs are coming down year-over-year with cheaper alternatives to something like the original Oculus Rift or HTC Vive.

In fact, the Oculus Rift S is only $399 at Best Buy. Well, currently anyway. I remember when the Rift was $899 when it first came out.

But what about getting all of the other fun apparel? For instance, you could always add the AgileVR exoskeleton to enhance movement in your game. Which costs nearly as much as the Rift S itself.

My point is that you can easily spend a lot of money setting yourself up with a decent VR gym. But, I suppose people spend way more than that on traditional workout equipment. Plus, you can still play other games outside of the realm of fitness.

One of the most used pieces of workout equipment in my house are my weighted gloves. Two pounds on each hand vastly increases the workout while playing the Kinect. But, the controllers for VR make wearing them appear extremely difficult.

Which is a shame considering how much I love wearing the weights while playing.

On the other hand, I do have a pair of 2-pound wrist weights. I should still be able to wear those while jumping into VR fitness.

Right now, it doesn’t take long to set up my game and strap my weights on while playing the Kinect. But I suspect that suiting up with VR fitness equipment will double that time.

And I think that’s going to be the biggest fault for many.

I can see a lot of people coming out of the gate strong to play Virtual Reality workouts for a couple of months. But then laziness will step in and some will consider the time it takes to prepare as reason enough not to work out.

Think about it; why do so many people have workout DVDs that are collecting dust on the shelf?

Many of us simply don’t have the time to spend 10 minutes putting on VR gear in the day. But, perhaps I am being too hard on this point. I’ll know more once I get my own VR system.

Looking Forward to Comparing with Kinect

Don’t get me wrong, I’m excited to throw my hat into the VR fitness arena. If anything, I get content and data from the experience. I’m just not absolutely sure if it’s practical for those of us in small homes without a lot of money.

I suppose one could try it by getting a used Oculus rift or another VR unit.

I guess only time will tell if VR fitness compares to what I receive from the Xbox Kinect. It should make for an interesting article, anyway.

(8515)
$84.89 (as of May 24, 2022 12:30 GMT -06:00 - More infoProduct prices and availability are accurate as of the date/time indicated and are subject to change. Any price and availability information displayed on [relevant Amazon Site(s), as applicable] at the time of purchase will apply to the purchase of this product.)

(28627)
$7.95 (as of May 24, 2022 12:30 GMT -06:00 - More infoProduct prices and availability are accurate as of the date/time indicated and are subject to change. Any price and availability information displayed on [relevant Amazon Site(s), as applicable] at the time of purchase will apply to the purchase of this product.)

(8213)
$7.88 (as of May 24, 2022 12:30 GMT -06:00 - More infoProduct prices and availability are accurate as of the date/time indicated and are subject to change. Any price and availability information displayed on [relevant Amazon Site(s), as applicable] at the time of purchase will apply to the purchase of this product.)

(104427)
$9.40 (as of May 24, 2022 12:30 GMT -06:00 - More infoProduct prices and availability are accurate as of the date/time indicated and are subject to change. Any price and availability information displayed on [relevant Amazon Site(s), as applicable] at the time of purchase will apply to the purchase of this product.)

(129856)
$59.99 (as of May 24, 2022 12:30 GMT -06:00 - More infoProduct prices and availability are accurate as of the date/time indicated and are subject to change. Any price and availability information displayed on [relevant Amazon Site(s), as applicable] at the time of purchase will apply to the purchase of this product.)
Privacy & Cookies: This site uses cookies. By continuing to use this website, you agree to their use.
To find out more, including how to control cookies, see here: Cookie Policy