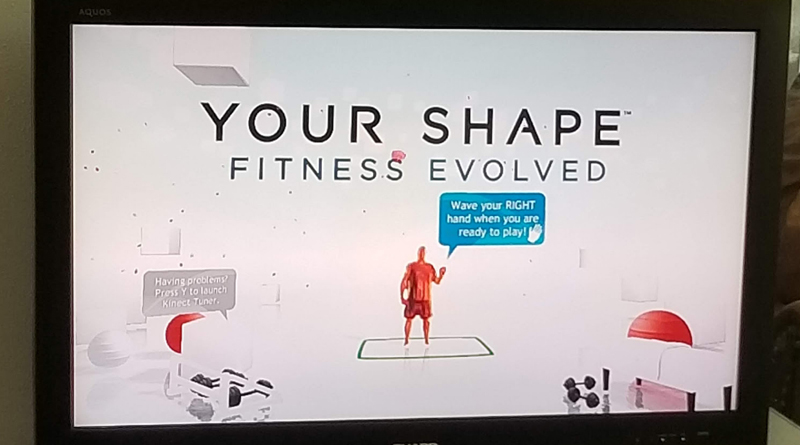 Before you start hating, I know the Kinect is obsolete and among Microsoft’s growing pile of discarded toys. But, I still want to add a bit of appreciation for the Kinect game, “Your Shape Fitness Evolved.” After all, it’s helped me lose more than 80 pounds.

And it’s still a game I play to this very day. Though, I am crossing my fingers that the Kinect doesn’t crap out on me.

If you’re looking to work yourself up into a decent sweat while having fun, this might be a title for you to check out. Since it’s only $0.99 at Gamestop, it’s not all that bad of an investment.

Table of Contents hide
What is Your Shape Fitness Evolved?
Why Would You Play Your Shape Fitness Evolved?
Gamifying Your Fitness
7 Things to Point Out in this Kinect Workout Game
Gym Games
Traditional Exercise Sessions
Stretching and Tai Chi
Virtual Smash
Ultra-Sensitive for the Sensor, Not Always a Good Thing
Doesn’t Have Solid Stat Tracking
Why Do I Still Play the Xbox Kinect?
Gamify Fitness for Yourself

What is Your Shape Fitness Evolved?

Released in November of 2010, this aging game can still get the blood pumping and the sweat pouring. That is, as long as you push yourself to play it as it was intended.

Your Shape Fitness Evolved is an Xbox 360 Kinect game that combines traditional workout routines and games to help you burn some calories. And with the sheer number of routines and games you can play, it’ll keep you busy for quite a while.

If you want to get friends and family involved, you can have up to four players in the “Gym Games” and compete.

Why Would You Play Your Shape Fitness Evolved?

I know a lot of people who have workout DVDs sitting on shelves and collecting dust. For me, this game is one of the most common played on the Xbox 360. And by that, I mean every morning to start my day.

After 30 minutes of playing the gym game, “Virtual Smash,” I’ve burned around 400 calories. Part of this is because I wear 2-lb weighted gloves while playing as well. This greatly amplifies the workout.

In fact, the first time I played the game with the weights on, nearly everything from my waist up was sore. You see, Virtual Smash requires twisting and punching motions. When you’re wearing the weights, all of that movement requires more energy from your muscles.

But Virtual Smash isn’t the only reason why you would want to play Your Shape Fitness Evolved. It comes packed with a lot of different activities depending on your level of physical fitness.

Personally, I started playing this game when I was well over 280 pounds. Which meant I was able to play the Xbox 360 workout game without putting myself into cardiac arrest.

And lastly, don’t forget how cheap the game is right now. Because Microsoft gave up on the Kinect and fewer people are playing, you can pick up Your Shape Fitness Evolved for about a buck.

Considering how much weight I’ve lost thanks to this specific game, that’s quite a good return on my money.

To gamify fitness, you’re helping yourself focus more on the engagement rather than the routine. Instead of looking at it like a sweaty and grueling workout, you can look at it as though you want to beat your best scores.

And yes, the dork in me writes down the scores in Virtual Smash to see if I can beat my overall average with each session. And before you ask, yes…it involves a spreadsheet.

7 Things to Point Out in this Kinect Workout Game

Ok, so what makes Your Shape Fitness Evolved part of my daily routine years after its release? Well, there are quite a few things I can point out…but not all of them are positive.

But, it’s nothing that would sway me from turning it on every morning. Like I said, I play this game nearly every day. This morning, I nearly broke my all-time high in Virtual Smash on the hardest difficulty.

Perhaps the most used aspect of this Kinect workout game is the actual “Gym Games.” In this section, you’ll find aerobic activities that go above and beyond just working out.

Take Virtual Smash, for instance. In this Gym Game, you’re punching blocks to break them. The faster you move, the more points you make. You’re not doing jumping jacks or squat thrusts.

There’s a variety of different gym games you can play, each focusing on different parts of your body.

If you want a more traditional workout, you can set that up as well in Your Shape Fitness Evolved. you can choose difficulty levels, set up routines or work out for specific lengths of time.

I suggest going through the initial workout and finding your limits. You can then unlock other workouts as you progress.

One aspect of the game I’ve been doing more of lately is the stretching and Tai Chi. By following the personal trainer and positioning yourself correctly, it’s quite relaxing.

The sensor will detect when your body, arms and legs are in the right position and award points for holding still.

It’s not as easy as it sounds, but I found it fulfilling nonetheless.

OK, so it might sound like I am obsessed with this gym game. But I tell you, Virtual Smash is one of the best workouts for the Xbox Kinect I’ve ever played. And trust me, I record all game play in a spreadsheet.

Out of all the Kinect games I have, which is around 20 or so, this one works up a sweat the most. Usually, this is because I am also wearing weights while playing.

If you’re curious, I use a Fitbit Charge 3 to record my heart rate while playing any Kinect workout game. And Virtual Smash is the only one that has raised my BPM to 190!

Ultra-Sensitive for the Sensor, Not Always a Good Thing

Now for some of the bad in Your Shape Fitness Evolved. The sensor isn’t always the most accurate during certain activities.

There have been times when my reflection on-screen will punch through blocks but the game not record it. And in Tai Chi, certain moves will never register correctly.

However, this could also be caused by the lighting in my living room. I don’t have an overhead light and the huge bay window washes everything on the right side. So, I want to play this with better lighting so I can be positive this is an issue.

Like most other Kinect workout games, Your Shape Fitness Evolved keeps track of how many calories you burn. This is more of an estimate, though. Because everyone’s physiology is unique, there are too many factors that come into play for calorie burn for a device that isn’t connected directly to your body.

Still, it does give you an idea of how well you progress while playing. Just don’t bank on the calorie burn being 100% accurate.

I wish the game had better tracking of scores and charts. But keep in mind, this game was released a decade ago.

Even a nice score chart for the gym games would have been a great addition.

Why Do I Still Play the Xbox Kinect?

As I said earlier, the Xbox Kinect has helped me lose more than 80 pounds so far. In fact, I am in the best physical shape I’ve been in for over 25 years. For the most part, the Kinect is my go-to workout equipment.

Although Your Shape Fitness Evolved is the most played game on the Kinect in my house, I do have a slew of other titles. Each one offers something unique, except for the dance games that my daughters are addicted to.

Still, comparing the difference between what I look like in 2017 and 2013 is night and day. I don’t even look like the same person.

Gamify Fitness for Yourself

There is no doubt, Your Shape Fitness Evolved is one of my favorite Xbox 360 workout games. From losing weight to toning muscle mass, it’s made a huge difference in my life.

But, it’s not the only way to gamify fitness.

Find something that engages your mind. When you’re having fun, you’re not thinking about the workout.

(68298)
$54.99 (as of August 5, 2022 01:30 GMT -06:00 - More infoProduct prices and availability are accurate as of the date/time indicated and are subject to change. Any price and availability information displayed on [relevant Amazon Site(s), as applicable] at the time of purchase will apply to the purchase of this product.)

(111658)
$10.99 (as of August 5, 2022 01:30 GMT -06:00 - More infoProduct prices and availability are accurate as of the date/time indicated and are subject to change. Any price and availability information displayed on [relevant Amazon Site(s), as applicable] at the time of purchase will apply to the purchase of this product.)

(5888)
$39.99 (as of August 5, 2022 01:30 GMT -06:00 - More infoProduct prices and availability are accurate as of the date/time indicated and are subject to change. Any price and availability information displayed on [relevant Amazon Site(s), as applicable] at the time of purchase will apply to the purchase of this product.)

(17387)
$37.99 (as of August 5, 2022 01:30 GMT -06:00 - More infoProduct prices and availability are accurate as of the date/time indicated and are subject to change. Any price and availability information displayed on [relevant Amazon Site(s), as applicable] at the time of purchase will apply to the purchase of this product.)

(28547)
(as of August 5, 2022 01:30 GMT -06:00 - More infoProduct prices and availability are accurate as of the date/time indicated and are subject to change. Any price and availability information displayed on [relevant Amazon Site(s), as applicable] at the time of purchase will apply to the purchase of this product.)
Privacy & Cookies: This site uses cookies. By continuing to use this website, you agree to their use.
To find out more, including how to control cookies, see here: Cookie Policy