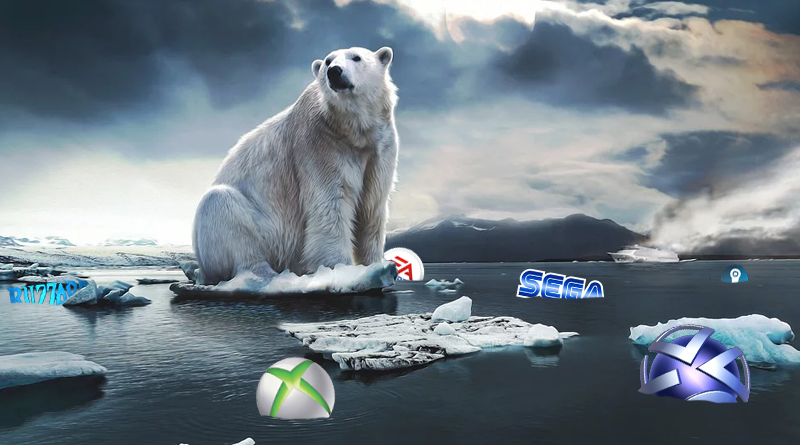 Have you ever thought about how the games you play affect climate change? To be honest, before September of 2019, I never gave it much thought. But after reading the commitments brought forth by Playing4ThePlanet.org, it’s hard not to correlate games and climate change.

In reality, there’s quite a bit to unpack when you consider the impact the gaming industry has on a global scale.

And I know I am a bit late to this party, but I wanted to blog about it anyway. Given the nature of the last quarter of 2019, I think you can give me a mulligan.

In fact, climate change is more important than ever from the perspective of the gaming industry. After all, the industry itself reaches some 2.5 billion gamers around the world, according to statistics in 2016.

You can bet it’s a much greater number today. And to put it into perspective, that’s nearly 1/3 of the population of Earth.

How Do Games Impact Climate Change?

When you turn on your console or load up Steam on the computer, do you think to yourself, “Is this good for the environment?

But just about everything we do as gamers have some kind of impact. Whether directly or indirectly, games will affect climate change in some fashion.

Turning on the television, hitting the power button on a PS4 or Xbox…video games require power. Otherwise, they cease to be “video games.” And although consoles don’t take up as much as a PC to run on average, they are still using power.

In the near future, I’m going to run a few tests to see how much energy is needed to operate our PS4. But I can say, with every child in the house playing the PS4 or Xbox consoles, we get that dial spinning on the electricity meter.

When it comes to the PC, that’s a bit different. Most of us leave our computers on all the time anyway. So whether you’re playing GTA Online on the computer or typing out your resume, power is still being consumed.

However, the computer will dump more into graphics and CPU processing when playing games. Again, I’ll run some tests on my own PC to see exactly how much.

But I already know that my computer probably uses up more power than any other device in the house during the month.

What do you do with your boxes and plastic that come with every gaming device you buy? A lot of people simply throw it in the trash and call it a day. Personally, I recycle everything I can out of every packaging.

But that’s because Westminster, Colorado makes it quite easy to recycle.

Still, some of the packaging that goes into new games is often un-recyclable. I know that a vast portion of games today are all digital. But how often do you replace a controller, battery or cable for your PS4 or Xbox?

Speaking of replacements, end-of-life trash is always a problem for games and climate change. Part of this is due to how electronics are developed. In Colorado, it’s a hefty fine for throwing away old electronics because of the materials.

So, people like myself try to recycle by shipping electronic trash to certain processors who pay.

Unfortunately, many people will toss a broken controller, monitor, console or other peripherals into the trash without thinking. Since most of these things are made of plastic and other non-biodegradable materials, it adds up over the course of the gaming industry’s lifespan.

I know I’ve covered the “real” gaming platforms, but what about mobile devices? Yes, they are guilty of tapping the environment as well. And I’m not just talking about how disposable phones and tablets are today.

Millions of people will immediately buy the latest and greatest mobile devices as soon as they come out for no other reason than because it’s “awesome.” That’s how a lot of manufacturers make most of their money.

A large portion of those people will sell off their old devices or trade-in when the newest phone comes out. But what happens to those older devices when no one wants them?

OK, now let’s talk about power consumption. Just like a computer system, it takes more energy to process graphics, taps and display than if you were to leave the phone sitting idle.

In fact, my friend has to charge her phone three-times as often as I do because she plays quite a bit of mobile gaming. Since most people charge their phones through wall sockets, the power comes from the grid.

Now I know it’s not a lot of electricity to charge a phone. But when millions of phones are plugged in around the world, the amount of power adds up.

Playing for the Planet Alliance

One organization that combats games and climate change is Playing for the Planet Alliance. This is a group of several big-name gaming companies that joined forces to lay down their own commitment to reduce gaming’s carbon footprint.

For instance, Sony, the developer of PlayStation, plans to add better energy efficiency to consoles. This will include chip architecture, lower power suspended modes and power scaling.

It’s estimated this will reduce carbon emissions by 29 million metric tons over the span of a decade. This is on top of the already 16 million tons reduced thus far by the company.

Some companies, such as mobile game developer Supercell, plan to offset 200% of the studio and gamer market energy use.

This means they’ll essentially buy credits that put 200% more energy back into the grid from renewable sources. This includes power the development studio uses and estimated energy from those who play the company’s games.

Much like how GreenGeeks offsets web hosting server use by 300%.


What is ColoradoPlays Doing About Games and Climate Change?

Although ColoradoPlays isn’t part of the Alliance, we still want to do our part to reduce the impact of online gaming. After all, we’re all about helping charities and good causes.

While our impact on these charities isn’t as massive as we’d like, we’ll still do what when can in any way.

One thing we love doing is the Extra Life charity event weekend of 24-hours of gaming. And while this is immensely popular among the gaming community, it doesn’t mean players can’t hold their own charity drives.

On April 22nd, 2020, we’ll do a 24-hour live stream to raise money for various groups. One in particular that I like is the Arbor Day Foundation’s, The Time for Trees. Since it’s Earth Day, we’ll play games related to recycling and building.

We’ll plan on playing games like Raft, Subnautica, Minecraft and anything else we come across in the meantime.

All donations will be sent directly to The Time of Trees. And I’ll even cover the PayPal fees so every donation gets to the organization.

This weekend, we’ll brainstorm a bit and see if there is anything else we can do to help games and climate change. So I have no doubt that this blog post will change a few times throughout the year.

If you have any ideas, feel free to comment below or hit us up on social media.

What Can You Do for Games and Climate Change?

It’s amazing to me that large corporations are taking responsibility when governments are failing to do so. But it shouldn’t stop at the top. All of us can do something today to improve games and climate change.

Because if something isn’t done soon, regulations can be put into place that will strangle our favorite pastimes.

(5036)
$54.68 (as of August 8, 2022 03:00 GMT -06:00 - More infoProduct prices and availability are accurate as of the date/time indicated and are subject to change. Any price and availability information displayed on [relevant Amazon Site(s), as applicable] at the time of purchase will apply to the purchase of this product.)

(337)
$549.99 (as of August 8, 2022 03:00 GMT -06:00 - More infoProduct prices and availability are accurate as of the date/time indicated and are subject to change. Any price and availability information displayed on [relevant Amazon Site(s), as applicable] at the time of purchase will apply to the purchase of this product.)

(57250)
$69.00 (as of August 8, 2022 03:00 GMT -06:00 - More infoProduct prices and availability are accurate as of the date/time indicated and are subject to change. Any price and availability information displayed on [relevant Amazon Site(s), as applicable] at the time of purchase will apply to the purchase of this product.)

(479)
$18.99 (as of August 8, 2022 03:00 GMT -06:00 - More infoProduct prices and availability are accurate as of the date/time indicated and are subject to change. Any price and availability information displayed on [relevant Amazon Site(s), as applicable] at the time of purchase will apply to the purchase of this product.)

(22877)
$19.99 (as of August 8, 2022 03:00 GMT -06:00 - More infoProduct prices and availability are accurate as of the date/time indicated and are subject to change. Any price and availability information displayed on [relevant Amazon Site(s), as applicable] at the time of purchase will apply to the purchase of this product.)
Privacy & Cookies: This site uses cookies. By continuing to use this website, you agree to their use.
To find out more, including how to control cookies, see here: Cookie Policy