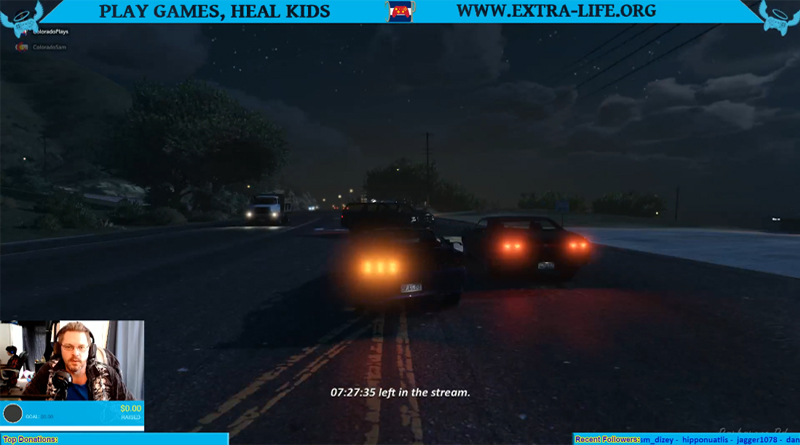 On November 2nd and 3rd, we participated in Extra Life 2019 and the 24 hours of gaming event. And although we didn’t really bring in a ton of money, we still managed to help the charity. And it was an awesome weekend that I desperately needed.

After all is said and done, I still think 2019 was our best year for donations…all things considering.

Currently, we don’t have an office. So, our gaming and charity work comes directly from home. Which means everyone’s computers are in very close proximity. And since I don’t have the money for a professional set up, we deal with what we’ve got.

Still, it’s an incredibly fun experience. We even loaded up a few games we haven’t played in years.

On November 2nd, DonorDrive, the platform for Extra Life, was attacked with a DDoS strike. This is a “Distributed Denial of Service” attack with the purpose of disabling a website and servers. Unfortunately, this caused issues for collecting donations.

In some cases, the donations were doubled. In our situation, it simply meant the Extra Life widget in XSplit didn’t work.

I suppose in an odd way, it’s good that we don’t have a huge following. I’d hate to have donating tainted because some people out there are pathetic little worms who think it’s funny to take down a charity which helps children.

Seriously, what kind of a d-bag does something like this?

And no, this doesn’t affect my opinion of supporting Extra Life. In fact, I can’t wait to sign up for next year.

How Did Saturday Go?

Instead of running the entire 24 hours straight, because I am getting too old, we decided to break the time between Saturday and Sunday. I’m not the most healthy right now and had a really rough October. So two days instead of hammering out one stretch was more ideal.

Saturday was pretty fun. We started with Diablo 3 play and moved on to a few other games throughout the day.

One of the highlights was playing GTA V. Well, the racing portion of the game, anyway. In fact, we met a new friend and wound up racing with him most of the time.

I almost forgot how much fun I find racing in GTA V.

Over the course of the day, we had a maximum of 136 live views on Twitch. What’s cool is we had about 42 views from this website and five from Extra Life’s own. This is because both platforms have the Twitch stream embedded.

One of our viewers donated $25 during the event. We also made a few cents in ad revenue and a subscription. So, that amount is being donated directly to Extra Life 2019.

How Did Sunday Go?

Unfortunately, Sunday was a bit slower. While we did see peak viewers earlier on, it seems we lost quite a few when switching to some of the older games.

That’s what happens when you play stuff a few people want to watch. Still, we really enjoyed getting back into Neverwinter Nights. It’s a game we plan on beating while streaming on Twitch.

We had a peak viewership of 91 and had far fewer watchers from the blog and Extra Life. This was kind of to be expected, though. It seems Sundays are not the best time to stream for us.

Of course, this depends completely on the game as well as the timeframe.

On Sunday, we didn’t get direct donations during the stream. However, we did make a few more cents from the ad revenue share on Twitch.

I’ll round it up to the highest dollar, though.

Anonymous Donation the Next Day

Something unexpected happened the next day, however. It seems we had an anonymous donation of $25!

Usually, the donations come when I promote something or if we’re live. This time, the donation came in without direct interaction. So if you’re reading this, anonymous donor, thank you…not only is it much appreciated, but it makes us feel awesome.

For Extra Life 2019, we’re currently ranked 2,783 as a team. But I think we can do better next year. Not to mention we still have the last month and a half to go.

I truly would like to be able to do more for Extra Life each year. And I believe we can as a team…as long as we put in the effort.

Success on any scale centers around the amount of effort you put in. This is why this blog and the YouTube channel are not doing as well as I’d hope. I’ve been a bit lackluster with the performance.

But, that is in the process of changing.

Over the past few years, we would stream on Twitch for a good month or so and then disappear. This doesn’t bode well for creating an audience. If I want to generate donations for charities like Extra Life or Geeks of Grandeur, consistency is key.

At the moment, the only stable schedule I have for streaming is Tuesdays and Thursdays. A lot of this has to deal with the other projects I have going on during the week. But, we would like to start streaming on Sundays.

Not only that, I am toying with the idea of experimenting with other times of the day. For instance, I can only stream from 6 pm to about 8 pm, or so, on Tuesday and Thursday. But what if I stream from 1 pm to 3 pm on Wednesdays?

The problem is that I have to jockey around my work schedule. While I would love to do this full-time, I simply don’t make enough money. So, I still need to pay my own bills.

A lot of the money we’ve donated to Extra Life 2019 is what the blog earns through ad revenue. This means it needs more quality content if I want a larger visitor and audience base to help generate those funds.

The tentative plan is to create at least two articles per week. Perhaps more if there is something cool going on.

But if I can get this website consistent, maybe we can bring in a larger audience to help with the charities we support.

Extra Life has a lot of fun tools that I really didn’t use this year. I did include the Twitch stream on our team’s page, which helps us reach a few more visitors. However, I haven’t even looked at the new donation incentives.

Donation incentives could be something like shipping out a Colorado Plays coffee mug if someone donates $50 or more. I am hoping to have some fun incentives lined up for 2020.

I wouldn’t call this year a failure by any means. Sure, we brought in less than $100 total so far…but it’s more than Children’s Miracle Network had yesterday. And that’s one of the biggest points to make.

It doesn’t necessarily matter how much you give, but just that you’re giving.

And next year, I plan on having a lot more to give to all the charities I work with. It all starts with putting in more effort than I have in the past.

ColoradoPlays brought in $71.00 for Extra Life in 2019. Thank you to all who visit the blog and Twitch stream!