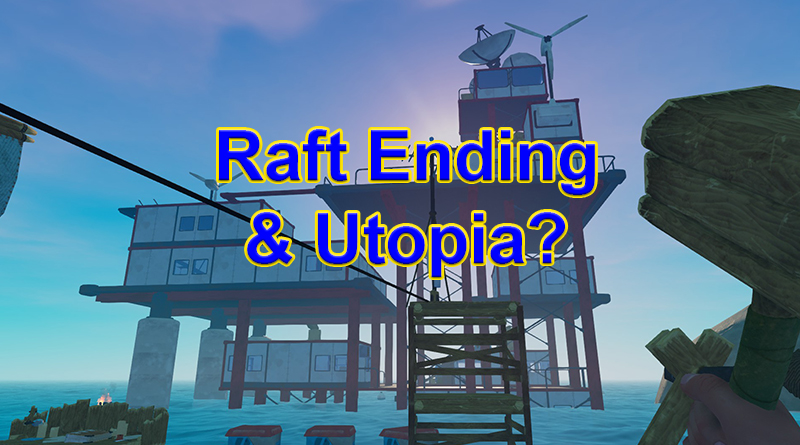 After playing off and on for a few weeks, I came to the Raft end game section of the early access version. In reality, it took less than 22 hours to reach this point. But what does it mean and is the game still worth playing if the Raft ending is currently missing?

That all depends on the type of player you are. Even after hitting the end game the first time around, I’ve still logged quite a few hours in the game.

UPDATE December 29, 2020: Yes, I know this article is quite outdated. It was created back when the tower was the final thing you could do in the game. But, recent updates have brought a lot to Raft. And we’ll be playing quite a bit of it in the near future to update this post.

Table of Contents hide
Getting to the Raft End Game Area
Build the Radio and Antenna Set
What is Utopia?
Finding More Islands to Explore
Should You Keep Playing?
Added Features
Building Bigger and Better
Plenty of Achievements
Semi-Regular Updates
Turn Up the Difficulty
Is the Game Still Worth Buying Even Without a Finish?
Go Beyond the Raft End Game

Getting to the Raft End Game Area

Currently, the Raft end game is simply reaching a whiteboard that has some information regarding Utopia and possibly where to find it. According to the newspaper clippings, the planet was flooded due to glacial melt.

Which really isn’t far from the facts of today.

You find this by building the radar on your raft and following the blip. It’s much easier to do if you have a sail.

After getting a Steam achievement for finding the whiteboard, there doesn’t seem to be much more to really do. Even after spending a bit of time researching the end online, it just seems the actual Raft end game scenario isn’t finished.

However, you can follow along with development of Raft on the Steam Community page.

Build the Radio and Antenna Set

To reach the Raft ending, you need to build the radio, a battery and three antennae. I sat the radio on a second level near the back of my raft with the three antenna towers at distant corners at the same height.

Using the radio, you’ll see a blip…this is the Raft ending location. It’s a tower that has a whiteboard in one of the rooms at the very top. You’ll have to play a bit of parkour to get up to it, but the journey isn’t overly difficult.

NOTE: Having a sail and an anchor will make getting to the tower much easier. I’ve even made use with the paddle to get as close as I can without hitting objects. Because it messes with my OCD when my raft is floating askew.

In the radio tower, you’ll find a few crates with some loot. I found a few new recipes for stew, metal ingots and a few other goodies. For me, the soup alone was worth the trip. I love crafting food in any game.

From what I can glean from online sources and in-game facts, Utopia is where humanity settles after the world is engulfed in water. Unfortunately, it doesn’t exist in-game as of yet.

I’m curious as to whether the developer will add in NPCs to Utopia or if reaching it will simply end the game with some fancy pre-credit video.

Either way, I would be happy.

According to an August update from Redbeet, new additions to Raft are on the way. Unfortunately, there’s no ETA as of yet.

I recently set sail yet again to see if any new updates made their way in-game. I found a couple of unique islands I’ve never seen before. For instance, I found the Captain’s island and a small shipwreck.

Needless to say, I am now wearing a Captain’s hat.

I’m not sure when some of these additions were pushed out. It’s been a few months since I’ve played. But it was a bit of a pleasant surprise.

Should You Keep Playing?

Although the Raft ending isn’t complete, there is still quite a bit to do in the survival crafting game. I guess it really depends on your own imagination and whether you’re content with simply floating across the ocean on a raft.

Personally, I don’t mind survival games that really don’t have a purpose. It’s why I played the Day Z mod and why I loved H1Z1 before Daybreak pulled the plug.

But, not everyone is into the relaxing-while-floating gameplay…and that’s fine. Everyone has different tastes.

A few months ago, the developers added new features and fixed several bugs. For instance, you’re now able to build corner pieces on your raft. Not to mention the respawn timer for the shark is increased.

This means you can get a bit more done before a new shark enters the mix.

While the end game would be nice, adding features helps keep an audience in the game while development continues. This way, consumers don’t think you’ve completely given up on creating the game.

The downside is how long it takes between updates. One of the biggest complaints to Redbeet right now is the timespan before anything new is announced or implemented.

Survival games like Raft have the capacity to keep players engaged through building bigger and better vessels. It’s one of the reasons why so many people still play Minecraft to this day.

Unfortunately, this element won’t keep everyone’s attention held for long. Not everyone appreciates a slow-burning game.

And I don’t blame the fast-paced lovers to jump ship on Raft.

Now if the developers would only include a rudder, all would be perfect for sailing. Or at least closer to it, anyway.

One of these days, I might even try to duplicate the Titanic without Creative Mode!

After playing for 47 hours, I’ve only unlocked 19 of 47 achievements. Three of which are hidden from view. This means you need to really dive into the game to find what’s missing if you want 100%.

Some of the achievements in Raft are going to take a bit of time to accomplish. For instance, surviving for 365 in-game days is going to take some time. Especially when you have to consider the damage a shark can do to you while in the water.

Perhaps surviving 365 days would be a personal achievement if you can do it in hard mode.

According to the developers, the game is still in active development. Although it’s been quite a while since they pushed a new update, the team is still active on social media and Steam.

In fact, there was an update on Facebook on Raft’s official page showing how you can connect fuel pipes to engines?

Now my interest is piqued.

Turn Up the Difficulty

Like all other games, turning up the difficulty is always a good way to get more out of a game. In this case, you can set the difficulty to hard and turn on friendly fire. This means you can accidentally hurt each other.

Or you can go full-out PvP for the hell of it. Last man standing on a raft?

The game takes on a whole new persona when turning these two settings on. This is especially true since you would need the assistance of a friend to respawn your character.

In essence, it’s kind of like turning on hardcore mode in other video games…which is often how I prefer to play anyway.

Is the Game Still Worth Buying Even Without a Finish?

That’s a question that plagues many when it comes to early access games. Can you afford to put money into something which may or may not be finished in the near future?

For myself, the few bucks I spent on the game was worth the investment. While I hope they add the Raft ending soon, I still have much to do with this title.

In reality, it’s going to take an awfully long time to survive for 365 in-game days to get the achievement…especially since I love night fishing.

It makes the days last twice as long when you don’t sleep.

But in the end, it’s all about what you’ll get out of the experience. For someone like me who loves crafting and survival games, the price isn’t really all that bad for what you get.

If you’re looking for something that is more fast-paced, it might not be for you.

Go Beyond the Raft End Game

I’m the type of person who enjoys his own achievements. For instance, can I fill up a large chest with nothing but copper ingots? Strange, I know. But it all boils down to what you get out of the game.

Personally, I have a bit of a fear when it comes to deep water. Games like Raft get my heart pumping at certain points. And it’s the physical interaction that drives me to keep playing Raft.

I’m sure at some point I’ll eventually get bored. But in the meantime, I am getting my money’s worth.

(837)
$49.99 (as of May 23, 2022 12:00 GMT -06:00 - More infoProduct prices and availability are accurate as of the date/time indicated and are subject to change. Any price and availability information displayed on [relevant Amazon Site(s), as applicable] at the time of purchase will apply to the purchase of this product.)

(85790)
$79.99 (as of May 23, 2022 12:00 GMT -06:00 - More infoProduct prices and availability are accurate as of the date/time indicated and are subject to change. Any price and availability information displayed on [relevant Amazon Site(s), as applicable] at the time of purchase will apply to the purchase of this product.)

(26751)
$28.98 (as of May 23, 2022 12:00 GMT -06:00 - More infoProduct prices and availability are accurate as of the date/time indicated and are subject to change. Any price and availability information displayed on [relevant Amazon Site(s), as applicable] at the time of purchase will apply to the purchase of this product.)

(2132)
$44.99 (as of May 23, 2022 12:00 GMT -06:00 - More infoProduct prices and availability are accurate as of the date/time indicated and are subject to change. Any price and availability information displayed on [relevant Amazon Site(s), as applicable] at the time of purchase will apply to the purchase of this product.)

(1675)
$14.99 (as of May 23, 2022 12:00 GMT -06:00 - More infoProduct prices and availability are accurate as of the date/time indicated and are subject to change. Any price and availability information displayed on [relevant Amazon Site(s), as applicable] at the time of purchase will apply to the purchase of this product.)
Privacy & Cookies: This site uses cookies. By continuing to use this website, you agree to their use.
To find out more, including how to control cookies, see here: Cookie Policy