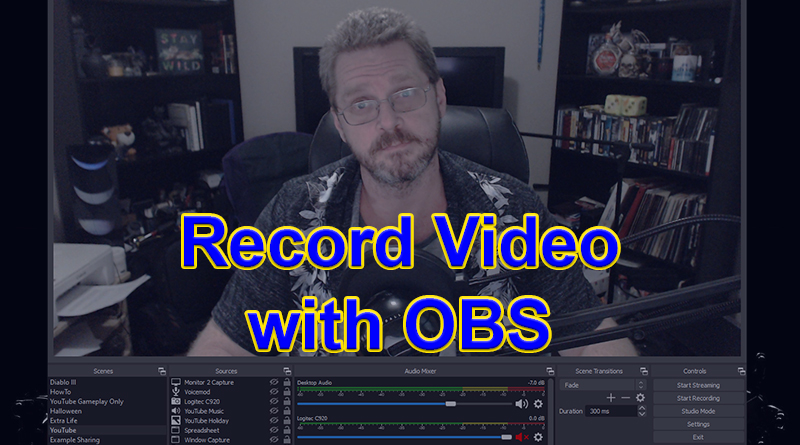 Open Broadcaster Software has quite a bit of flexibility as a free program. And you don’t need to solely use it to stream onto Twitch or YouTube. In reality, it’s easy to record video using OBS for a variety of purposes.

In fact, I use it exclusively to record non-gaming videos for one of my other YouTube channels. Personally, I love how the software handles sound inputs and noise gate and suppression.

Today, I’ll walk you through how to record using OBS and some of the things you can do with the files.

Record Using OBS on a PC

Unfortunately, I don’t have a MAC or a Linux machine. So, this tutorial is focused on a PC setup. However, I don’t see how it would make much of a difference on other computer systems.

What Are You Recording?

First, you need to decide what it is you’re going to record. Do you want to record gameplay with OBS? Are you creating a tutorial using your web browser? Perhaps you just want to talk on camera.

What you decide to record with OBS is going to make a difference in how you set it up. For instance, recording gameplay means you have to add your game as a source to OBS.

And then it depends on whether the game is on your computer or if you’re recording from an external device such as Playstation or Xbox.

For example, I record videos for my other YouTube channel. The primary source is the Logitech C920 webcam and my Blue microphone. This makes up about 90% of the content I create for my writing channel.

But, if I am doing a tutorial on something like WordPress, then I add the web browser as a Window Capture source as well.

So, you see, what you want to record is going to vastly change how you set up OBS.

Setting Up Your OBS Scenes

Scenes in OBS are different layouts of what you’re recording or streaming. Each one has different assets depending on what you want to show. You can literally make a specific scene for every game you own complete with unique images and overlays for each one.

If you want to record OBS videos while also having the capacity to live stream on Twitch, you can set up two separate scenes. As you can see, I have several scenes set up including the “YouTube” one where it includes the inputs I want most of the time.

It’s always a good idea to set up individual scenes for specific purposes. That way, you don’t have to keep adding, removing, or hiding assets you don’t want to show.

Case in point, my YouTube scene does not have the Streamlabs follower overlay because I don’t want that showing during a recording. Part of that is because my YouTube scene is not gaming-related.

In OBS, you have access to a wide scope of inputs. These are elements you want to add to a stream or recording, such as your camera or graphic overlay. You’ll need to decide what inputs you need for the video you want to create.

You’ve probably seen story-boarding in movies, or perhaps you’ve used it yourself. But creating one before you record is of great benefit. I like to use tools like Mindomo to create a mindmap of what I’m creating.

Having a plan for your video will help you choose what sources to add. So, it’s worth taking some time to hammer out the details before starting.

Depending on what you’re recording, you can get quite elaborate with what you show. Though, I’ve found that minimalist is often the better approach in a myriad of cases.

When you record with OBS, you have a series of options available in the settings menu. However, I suggest leaving most of them at the default setting until you get the hang of what you’re doing.

If you go to File > Settings, you’ll see all of the adjustments you can make. Click on the “Output” icon.

You’ll see two sections, “Streaming” and “Recording.” For this tutorial, we’re only focusing on the latter.

Adjust your recording settings how you see fit. As you can see, I am recording MP4 files using the NVENC encoder because my video card supports that codec.

I also have the quality set to “Indistinguishable Quality,” which creates a larger file size.

You can also modify where the files are saved in the “Recording Path” field. This is simply a folder on your computer where you want OBS to stick the video. By default, it’ll save in your computer user’s account under “Videos.”

Before you hit record on OBS, you should take a look at your video resolution settings. This will contribute to the quality of the video depending on the format.

For instance, I record 1920 x 1080 when uploading to YouTube. This is going to differ depending on what platform you’re sending the video, how large you want the file, and the amount of quality you want.

From here, you can see that my base and output are both set to 1920 x 1080. However, you can change this to a variety of sizes.

I’m also running at 60 fps, which is great for uploading to YouTube. However, you can change this as well to make file sizes smaller and less fluid.

The bottom line is the video resolution when you record from OBS is completely up to you. It all depends on what you’re doing with the video.

But like I said earlier, it’s probably best if you leave the default settings for now. Then, when you have time, research what the best settings are for your OBS recording.

Once you have all your settings in place, simply click the “Start Recording” button.

At the bottom, OBS will keep track of the amount of time you’re video is recording. This is helpful if you only need a certain amount of video or if you’re trying to restrict yourself to a specific time frame.

When you’re done with the video, just click the same button again to “Stop Recording.” OBS will then save your file into your preferred location that I showed above.

NOTE: Give the system enough time to finalize the recording if you’re saving in MP4 format. Shutting down OBS too soon can corrupt the file and you’ll have to record in OBS again.

What to Do After You Record with OBS

Once your file is saved, you can now do with it as you please. This means adding it as B-roll, using it in another recording in OBS as background video, and more.

It all really depends on what you’re trying to do.

A lot of video platforms out there support a wide variety of formats. You can use the videos as teasers for your channel or to show highlights in social media.

The potential to use video is quite extensive.

You can quickly slap up a video on Twitter. However, it cannot be greater than 512MB in size. Depending on resolution and other settings, you can show several minutes quite easily, though.

Can you upload saved video files directly to YouTube? Absolutely. In OBS, you can choose three different file types for the social media giant. They are:

OBS supports more than this, but these are the only file types currently accepted by YouTube that are available when you record.

This is quick and easy if you just want raw footage on your YouTube channel. However, I prefer using editing software to clean it up some and add a bit more flair to the piece.

Speaking of Facebook, this is another great outlet for showing what you record from OBS. It supports most file types, including the MP4 default.

Click on the Photo/Video icon, find your file, and upload.

I like using Adobe Premier. I know there are free versions of editors out there, but I like how Premier is set up. Plus, I am friendly with a creator on YouTube who develops a lot of Premier tutorials.

At any rate, you can import the video into virtually any editing software and add a bit of pizzazz.

What Do You Record with OBS?

Out of the many systems I’ve tried, I’ve found it incredibly easy to record with OBS for just about any purpose. From YouTube tutorial videos to streaming on Twitch, it’s one of my go-to pieces of software.

It’s versatile, solid, and best of all…free. Just make sure your settings are set for the best results. It’ll take a bit of trial and error, but finding that sweet spot for quality and performance is worth the effort.

(3526)
$26.91 (as of May 26, 2022 13:30 GMT -06:00 - More infoProduct prices and availability are accurate as of the date/time indicated and are subject to change. Any price and availability information displayed on [relevant Amazon Site(s), as applicable] at the time of purchase will apply to the purchase of this product.)

(100456)
$8.95 (as of May 26, 2022 13:30 GMT -06:00 - More infoProduct prices and availability are accurate as of the date/time indicated and are subject to change. Any price and availability information displayed on [relevant Amazon Site(s), as applicable] at the time of purchase will apply to the purchase of this product.)

(51269)
$59.00 (as of May 26, 2022 13:30 GMT -06:00 - More infoProduct prices and availability are accurate as of the date/time indicated and are subject to change. Any price and availability information displayed on [relevant Amazon Site(s), as applicable] at the time of purchase will apply to the purchase of this product.)

(22122)
$16.99 (as of May 26, 2022 13:30 GMT -06:00 - More infoProduct prices and availability are accurate as of the date/time indicated and are subject to change. Any price and availability information displayed on [relevant Amazon Site(s), as applicable] at the time of purchase will apply to the purchase of this product.)

(234984)
$19.99 (as of May 26, 2022 13:30 GMT -06:00 - More infoProduct prices and availability are accurate as of the date/time indicated and are subject to change. Any price and availability information displayed on [relevant Amazon Site(s), as applicable] at the time of purchase will apply to the purchase of this product.)
Privacy & Cookies: This site uses cookies. By continuing to use this website, you agree to their use.
To find out more, including how to control cookies, see here: Cookie Policy