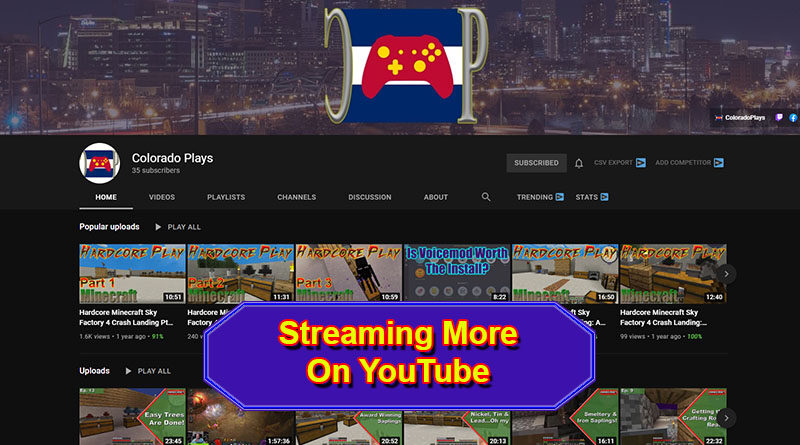 I’ve been toying with the idea of moving our live streams from Twitch to YouTube for quite some time. And although I wasn’t sure what to do, our last few broadcasts on Twitch convinced me to test the waters of YouTube streams.

Granted, we really don’t have the most dedicated schedule when it comes to going live. But that’s something I wanted to change in 2021. I just don’t think staying on Twitch is in our best interests.

At least not dedicated all of our content to that particular platform. Expanding might be quite beneficial in the long run.

Table of Contents hide
Why Focus on YouTube Streams?
Tired of Losing Audience Members to Hot Tubs
Not Making Perhaps $0.02 Per Month
Easier to Build an Audience for the Live Streams
Unable to Multistream Anyway
Videos are Searchable in Google
The Downside to Starting YouTube Streams
More Difficult for Monetization
Dealing with YouTube’s Algorithm
Fewer Viewers
Are We Abandoning Twitch?
Diversify Your Audience

Because we don’t really have a dedicated schedule for streaming, a lot of our issue with gaining an audience is our own fault. With that being said, there are a few key reasons why we are making the move.

Over the last few streams, we’ve lost a couple of viewers to suggested “hot tub” streams. The allure of an attractive woman in a bikini even takes away some of the women who watch us.

One of which was even a friend of mine.

You just can’t really compete all that well with that kind of alternative entertainment. Sure, I can slap on a horse head mask and act like an idiot for an ASMR video. But, I have more self-respect than that.

Not Making Perhaps $0.02 Per Month

I’ll never understand why so many people are determined to get enrolled in the Twitch Affiliate program. Unless you have a dedicated base of followers who plan on buying stuff, the income is quite paltry.

In reality, we make about 2,000% more income per day from the blog than we do from the Twitch channel.

Now, I know it’ll be quite a long time before we can get into the Partnership Program from YouTube streams. But, it feels more like we’re working towards something better overall.

Easier to Build an Audience for the Live Streams

It’s true that there are more live stream viewers on Twitch. But there is a reason why most of the popular streamers also have YouTube channels.

Thanks to how YouTube and its algorithm works, it seems like it’s easier to gain subscribers than it is for followers on Twitch.

Of course, that could also be summed up to personal experience. I’m sure there are a lot of Twitch streamers out there who would say the exact opposite.

But from my experiences with both platforms, it just seems like YouTube viewers are more regular and interactive.

I would love to be able to multistream. But as I am a Twitch affiliate, technically I can’t. This is against the terms of the Affiliate Agreement. In fact, Twitch owns the rights to your video content for 24 hours after the live stream.

As I’m interested in expanding the viewer base, this is something that appeals to me.

Videos are Searchable in Google

One of the best highlights of using YouTube over Twitch is how video content is searchable through Google. Saved videos in Twitch are not. At least, not any that I’ve ever seen.

In fact, one of my other YouTube streams generates quite a bit of traffic directly from Google as I cover a few topics of interest.

This is aside from the fact that it is ultra-easy to embed your YouTube content directly into a WordPress website. And yes, this has generated all kinds of views on my other blogs.

In order to make money from ads in the YouTube Partnership Program, you need 4,000 hours of watch time and 1,000 subscribers. On the other hand, you only need 150 followers and sustain 3 average viewers on Twitch.

In general, it’s far more difficult to make money from YouTube through advertisements. Not that you make a ton of money from ads on Twitch.

Still, you’ll need to stabilize a great audience base to reach those numbers on YouTube. And not everyone is that interesting to watch in the first place.

I often akin myself to being Eeyore on downers.

Another aspect of YouTube is facing against the dreaded algorithm. The system is so convoluted that there’s no real guarantee you’ll ever have your video content seen.

Even the slightest change in content type can decimate how often videos show up in the suggested column. They say it doesn’t matter, but I have data on one of my channels that paints a completely different story.

Anyway, it takes a bit of time to finagle your way around the YouTube algorithm, especially when it comes to streams.

There’s no doubt that current, YouTube streams just don’t have the same audience as Twitch. For example, right now there are 266,000 viewers on Twitch watching Grand Theft Auto V. At the same time, there are only 13,000 viewers for the same game on YouTube.

And it’s not just GTA, either. All of the games across the board have fewer viewers. This means it’ll be a bit more difficult to engage a new audience base.

However, that could also mean that those viewers will be far more interactive and dedicated.

That’s where VOD (video on demand) comes into play, though. If you can get a few hundred subscribers on YouTube, you might be able to draw more of a dedicated audience.

But, I don’t know this for sure because we haven’t really put in the effort yet.

Are We Abandoning Twitch?

Although we’re planning on doing more streams on YouTube, we’ll still be somewhat active on Twitch. We’re just trying to figure out the logistics of everything.

Mostly, it all comes down to how much time we have in a week. All of us work full-time jobs, and I, personally, have a lot on my plate. I find it difficult just to maintain what I have going on at the moment.

Still, we’d like to get some more videos on YouTube while doing a few streams throughout the week on Twitch.

Then again, we also would like to have a regular streaming schedule that isn’t tapping our time or pushing some of us closer to burning out.

When you’re a creator in any field, it’s always good to diversify your content across different platforms. This helps you reach a much wider audience who may be interested in what you create.

In fact, I saw a great deal of success doing this for my freelance writing blog. Once I started its YouTube channel and streams, I more than doubled my audience.

Don’t be afraid to explore different avenues. You may find a platform that is superior to Twitch for the type of people you’re trying to engage.

(14856)
$33.58 (as of August 8, 2022 03:00 GMT -06:00 - More infoProduct prices and availability are accurate as of the date/time indicated and are subject to change. Any price and availability information displayed on [relevant Amazon Site(s), as applicable] at the time of purchase will apply to the purchase of this product.)

(5482)
$29.99 (as of August 8, 2022 03:00 GMT -06:00 - More infoProduct prices and availability are accurate as of the date/time indicated and are subject to change. Any price and availability information displayed on [relevant Amazon Site(s), as applicable] at the time of purchase will apply to the purchase of this product.)

(337)
$549.99 (as of August 8, 2022 03:00 GMT -06:00 - More infoProduct prices and availability are accurate as of the date/time indicated and are subject to change. Any price and availability information displayed on [relevant Amazon Site(s), as applicable] at the time of purchase will apply to the purchase of this product.)

(47819)
$39.80 (as of August 8, 2022 03:00 GMT -06:00 - More infoProduct prices and availability are accurate as of the date/time indicated and are subject to change. Any price and availability information displayed on [relevant Amazon Site(s), as applicable] at the time of purchase will apply to the purchase of this product.)

(18363)
$52.50 (as of August 8, 2022 03:00 GMT -06:00 - More infoProduct prices and availability are accurate as of the date/time indicated and are subject to change. Any price and availability information displayed on [relevant Amazon Site(s), as applicable] at the time of purchase will apply to the purchase of this product.)
Privacy & Cookies: This site uses cookies. By continuing to use this website, you agree to their use.
To find out more, including how to control cookies, see here: Cookie Policy