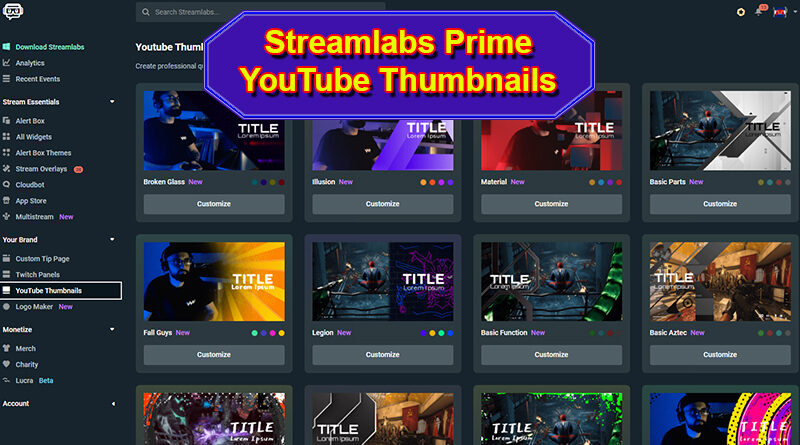 One of the perks to using Streamlabs Prime is access to the YouTube thumbnail library. Since titles and thumbnails play a massive role in getting viewers on YouTube, creating something appealing is virtually a requirement.

And today, I’m creating one that I’ll use for a game series on the YouTube channel.

Table of Contents hide
Finding the Right Thumbnail
Editing the Thumbnail
Select Background
Effect
Add Elements
Problems with Using Streamlabs Prime Thumbnails
Limited Customization Options
Need to Use Streamlabs with Templates?
Unable to Save Customizations
Setting Up the Outro
The Experiment
Subnautica
Does it Really Make a Difference?

Personally, I like color-coordinating thumbnails with the game I plan to play. For instance, Subnautica would have more of a blue hue as it pertains to underwater adventure.

But, then I’m left with the predicament of should I create a new thumbnail for every game, or just pick something to use on all videos? There’s something to be said about visual symmetry, especially if you’re trying to keep an audience engaged.

You don’t want too much of a difference in the thumbnails. Otherwise, viewers may not think the videos are from the same person. It’s all about delivering a uniform layout.

I’ve decided to use a single design for the series of videos. In this case, I’m doing gameplay of Subnautica. This means I want something that fits the overall feel of the game.

I decided on HyperScape because it was close to what I wanted overall for the YouTube Thumbnail.

Since I use images directly from the game in the thumbnail, I’ll have to play and take a screenshot before I can set it as a background image.

In this instance, I have a screenshot saved from the game. So, now, I will upload the image from the Select Background option.

As the screenshot is a bit off-center from where I want, I’ll have to enable the Edit Background option. This lets me move the image about as well as resize.

So, I can move it around a bit to get a view I am happy with. Though, I’m half-tempted to bring the screenshot into Photoshop and remove the target reticle.

From what I can tell, all of the YouTube thumbnails in Streamlabs has a very select color effect. Each is different according to the image. In this case, I chose HyperScape because it has a blue effect.

After clicking the “+” next to Effect, I can select one of the colors to use as the theme for the thumbnail.

In other words, you’re quite limited in what you can do according to the developer of the image. If he or she just created two variants, that’s all you’ll have access to.

The Add Elements section is where you make text edits as well as add icons, emojis, or upload your own image. If you choose to use your own image, you can upload a new one or a graphic you already have stored in Streamlabs.

I suppose if you want to make the thumbnail more unique, you could add your own images. In this case, I’m going to add our logo.

I bet if I thought about it a bit, I could probably come up with some ideas to accentuate the image even further. But for now, I want to see how much of a role the thumbnail plays in click-through rates.

When it comes to text, you have quite a few options available. Not only can you change the color, but you can also adjust the font weight and family. This gives you a lot of options for finding the best font to fit your needs.

First of all, a unique thumbnail is worth more than gold. Especially if it’s one that drives people to click the video. The inherent problem with using templates from Streamlabs is that you run the risk of “copying” another creator.

And given how the customization options for the YouTube thumbnail is quite limited, it would be easy to confuse viewers with the same layout as someone else.

This is why I will also add my own touchups and elements in Photoshop after downloading the image. But if you don’t have Photoshop, the Photopea app is also great for making adjustments.

Don’t get me wrong, there are a lot of nice-looking thumbnails in the library. But if I think a certain design is nice, so will a lot of other YouTubers who use Streamlabs Prime.

For the most part, I’ll probably wind up using the library of images to simply get ideas about what to create on my own. But, we’ll see how this case study goes with using one I design in Streamlabs Prime.

Need to Use Streamlabs with Templates?

I also don’t like the idea that you have to use Streamlabs Prime as your editing platform for thumbnails. Instead of being able to save one with a transparent background as a template, the whole image needs to be created in Streamlabs.

This can be a bit tedious if you plan on making a lot of videos in a short amount of time.

Unable to Save Customizations

Lastly, Streamlabs Prime doesn’t save the template. When you make font and color changes, add logos, and otherwise fine-tune the thumbnail, you’ll have to make all those adjustments again.

This is incredibly inconvenient as now I have to save the hexadecimal codes, fonts, weights, and more if I want to run a series of similar videos.

Setting Up the Outro

I know this isn’t necessarily part of Streamlabs Prime, but I am going to set up a new outro as well. And to do this for free, I’ll use Canva.

Canva has a ton of free outros available for YouTube. And customizing one to fit the channel isn’t really all that difficult. In fact, Canva is a much easier system to use than Streamlabs Prime.

In any case, if you need a free outro, you should start with Canva.

I’m going to try various thumbnails for different games. Unfortunately, I don’t have the money nor the interest to play some of the latest and greatest games out there.

So, I guess I’ll just see if the thumbnails help with what I already have.

Since I only have a few videos for Subnautica, it shouldn’t take me long to create and upload new versions on the older videos.

I know that Subnautica is a bit older of a game. This means it probably won’t gain a lot of visibility on the channel to begin with. I’ll have to see if there is a newer game I play that people are willing to watch.

Does it Really Make a Difference?

At the moment, I don’t know if a new YouTube thumbnail is going to make all that much of an impact. Then again, that’s what a case study is for.

If there is a significant difference, I’ll be sure to record the findings.

Overall, it’s not an incredibly difficult process to make these images in Streamlabs. Although there are several inconveniences, the creation process is quite straight forward and easy to manage.

If Streamlabs would add a save feature for customizing thumbnail templates, that would be great.

Try Streamlabs Prime for Yourself

(14342)
$15.51 (as of August 8, 2022 03:00 GMT -06:00 - More infoProduct prices and availability are accurate as of the date/time indicated and are subject to change. Any price and availability information displayed on [relevant Amazon Site(s), as applicable] at the time of purchase will apply to the purchase of this product.)

(55911)
$29.99 (as of August 8, 2022 03:00 GMT -06:00 - More infoProduct prices and availability are accurate as of the date/time indicated and are subject to change. Any price and availability information displayed on [relevant Amazon Site(s), as applicable] at the time of purchase will apply to the purchase of this product.)

(155058)
$20.00 (as of August 8, 2022 03:00 GMT -06:00 - More infoProduct prices and availability are accurate as of the date/time indicated and are subject to change. Any price and availability information displayed on [relevant Amazon Site(s), as applicable] at the time of purchase will apply to the purchase of this product.)

(9918)
$43.98 (as of August 8, 2022 03:00 GMT -06:00 - More infoProduct prices and availability are accurate as of the date/time indicated and are subject to change. Any price and availability information displayed on [relevant Amazon Site(s), as applicable] at the time of purchase will apply to the purchase of this product.)

(34655)
$29.88 (as of August 8, 2022 03:00 GMT -06:00 - More infoProduct prices and availability are accurate as of the date/time indicated and are subject to change. Any price and availability information displayed on [relevant Amazon Site(s), as applicable] at the time of purchase will apply to the purchase of this product.)
Privacy & Cookies: This site uses cookies. By continuing to use this website, you agree to their use.
To find out more, including how to control cookies, see here: Cookie Policy